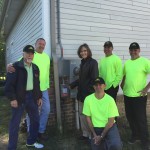 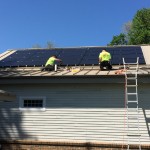 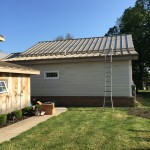 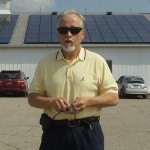 Dean Dorsey in front of Wolff Bros. installation in Medina

There are several reason why Sue and I chose to invest in solar now.  Federal and state financial incentives are helping to make solar a more attractive alternative. But when politicians, money, policy and laws are involved, there are risks. Energy companies constantly lobby politicians to change laws in their favor, including rules to prevent alternative energies from gaining market shares. So, politically it made sense to take advantage and lock in the incentives while they still exist.  But it just isn’t the politician we have to worry about. Energy companies also constantly apply to the PUCO for rules change in their favor.  They apply for rate increases, permission to add charges and rules that deter alternative energy options.

Currently we will receive the retail rate for the extra power our solar system produces and feeds into the electrical grid. This means that we can feed and pull energy in and out of the grid at the same price we pay for energy. During the summer, when our system over produces, the extra electric will flow into First Energy’s electrical grid. We will receive credit for that energy. During the winter, when the system is unable to meet our needs, we will be able to use the credits we’ve build up to pay for the extra electric we will need.

All electric homeowners know too well contracts don’t mean too much to utility companies or public utility commissions. Energy companies out west are already seeking rules to add additional charges to solar customers.   Sue and I are hoping that we will be lock in to the current rate agreements.  We are making a calculated risk that support for solar in Ohio is strong enough to dissuade policy makers from attempting to making changes that would discourage the use of solar.

As the director of a senior citizen social service agency, Sue sees the impact on the cost of liv